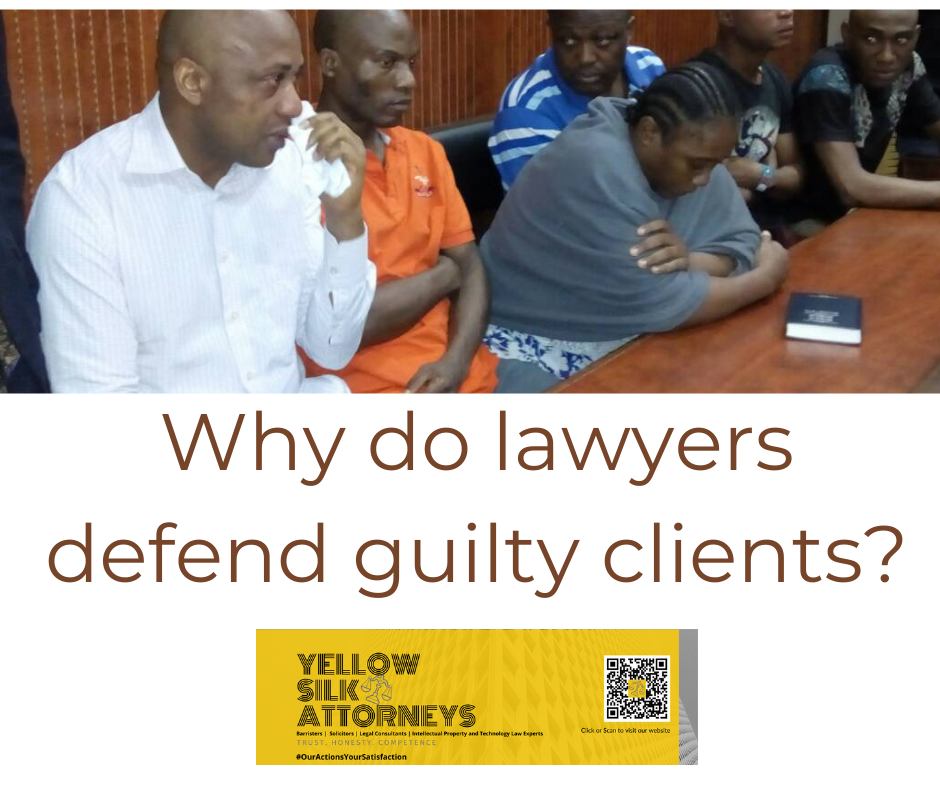 If today you meet a lawyer, what question will be the first on your mind that you would like to ask them? In all our years in professional legal practice, the following questions: “Why do lawyers turn something white into black”, “Why do lawyers defend a person who committed a crime?”, and “The criminal was caught red-handed committing a crime and confesses to it, why defend them?” certainly top the list of all Frequently Asked Questions about criminal defence.

But seriously: if Mr A has committed an offence, Mr A has confessed to everybody including the legal representative on the crime, why will the lawyer still defend Mr A?

The answer to these age-old questions lies in a fundamental technicality that must always be observed in criminal legal administration.

As a result, the criminal defence lawyer does not ask,” Did my client do it?” but rather asks, “Can the police or the government – as prosecutors – prove that my client did it?” No matter what the accused person has done, such a person will not be legally guilty until the prosecution has provided enough evidence to persuade a judge or jury to convict the accused person. In other words, it is not the prosecution that determines whether a person is legally guilty, it is the court.

However, the defence lawyer may not lie to the judge or jury by specifically stating that the defendant did not do something the lawyer knows the defendant actually do. Rather, the lawyer’s trial strategy and arguments must focus on the prosecution’s failure to prove all the elements of the crime.

For instance, in the case of stealing, stealing is defined in many criminal laws as the:

In this instance, the prosecution needs the prove the essential element of the offence of stealing which are: (1) Taking, (2) Lack of owner’s consent or authorisation, (3) fraudulent intention to permanently deprive the owner of the item.

Therefore, where the accused person is said to have of stolen the sun and has confessed – stealing the sun and the moon, the prosecution must prove the first element that both the sun and moon are things capable of being taken, or have been moved from one position to another. The prosecution needs to also prove a lack of consent and fraudulent intention.

ARE THE LAWS FAIR?

Since the lawyers are not the lawmakers, perhaps the legislatures should take the blame for not making factual guilty the emphasis on criminal trial but there are reasons why criminal laws are structured that way which you find below.

Presumption of innocence – Generally, every accused person is, except in limited cases, assumed to be innocent until proven guilty by the prosecution. Where any of the elements of a crime are not proven beyond reasonable doubts, the offender must be acquitted on the grounds of presumption of innocence.

Rule of Law – The concept of rule of law deals with the authority and influence of the law in a society, which constrains the exercise of the power of an individual or institutional behaviour. This, therefore, makes everybody subject to the law – and not the whims and caprices of the person or institution. Rule of law requires accountability of all persons, just law that is clear, publicised, stable, applied evenly and ensures human, contract and property rights. Rule of law also requires an open government where all processes by which law is adopted, administered, adjudicated, and enforced are accessible, fair, and efficient; and finally, justice is delivered by competent, independent and ethical persons who have adequate training, resources and makeup of the community. If the lawyer does not defend a client, it will be up to the police to determine guilt by providing unchallenged evidence. Laws of evidence dictate that only relevant and admissible evidence are considered in a criminal trial. Where there is no lawyer, all evidence including all that is irrelevant and inadmissible will be presented at the trial by the prosecution. Thus, the actions of the attorneys ensure a fair society where justice prevails.

Self-preservation – since the lawyer is the mouthpiece of the accused person, the lawyer only acts and behaves as the accused person would have if they have the same training in legal defence. Lawyers defend their clients to the best of their ability out of self-preservation. If the same defence counsel that puts up legal defence was framed for murder or accused of a crime, they would set up the same rigourous defence because it is their right.

Protecting the innocent – there have been cases where innocent persons have been sentenced to death, life imprisonment, or year of imprisonment on trumped-up charges, framed, being at the wrong place at the wrong time, or just coercion. There have been cases where people are tortured to admit committing crimes when there are no witnesses when there the evidence have been doctored or planted. Without putting up ferocious defences, there is no way to determine if they actually committed the accused crime.

While people constantly ask this question, “how can criminal defence attorneys defend guilty people?” no one ever asks, “How can a prosecutor condemn an innocent person? A vigorous defence is necessary to protect the innocent and to ensure that judges —and not the police—have the ultimate power to decide who is guilty of a crime.

OPINION OF LAWYERS ON A CLIENT?

Defence attorneys are ethically bound to zealously represent all clients, those whom they think will be justly found guilty as well as those whom they think are factually innocent. One of the rules governing lawyers is known as the cab-rank rule – where a lawyer is seen as a taxicab driver who does not determine his passengers but carries everyone that pays equally.

In truth, the defense lawyer almost never really knows whether the defendant is guilty of a charged crime. Just because the defendant says he did it doesn’t make it so. The defendant may be lying to take the rap for someone he wants to protect, or may be guilty, but only of a different and lesser crime than the one being prosecuted by the police. A defendant may have done the act in question, but the client may have a valid defence that would exonerate him.

Ethics and morals – while often synonymous – have two different meanings for defence attorneys. Ethics are the strict rules put into place to protect the rights of clients, namely criminal defendants. Morals are the nebulous rules of right and wrong. Many crimes are objectively immoral, but attorney ethics require that those accused (factually guilty or factually innocent) are afforded a competent and ethical defence. Defence attorneys are able to represent those accused – even those factually guilty – of immoral crimes because of the importance that every individual have fair treatment under the law. The purpose of the criminal justice system is not just to punish those who are guilty, but even more important is to make sure everyone has a fair trial and every opportunity for a competent defence. An experienced and ethical attorney does not ask the internal question, “is my client guilty?” but instead asks themselves, “what can I do to make sure the government is held to their burden, to make sure that they have a proper defence, to fight for their rights because that’s what preserves the system and the freedoms that all Americans are afforded?” It is important if you are accused of a crime to contact a competent, experienced, and qualified Lagos criminal defense attorney that will ask these questions. Churchill Kalu and the firm have years of experience representing defendants in every imaginable type of criminal case in Nigeria.  They are dedicated to defending the rights of clients and will fight for the best possible disposition, dismissal, and solutions to your case. Call +234-806-507-2667 or contact us by e-mail today to discuss your rights during an open consultation with our legal team.

WHAT IF A CLIENT CONFESSES?

It’s important to remember when contacting an attorney that the communications are confidential. There are some fringe exceptions but generally, communications about past criminal activity are still covered under this rule, even a confession to the crime the defendant is accused of. As discussed above, this should not impact the representation of an ethical, experienced and professional criminal defence attorney.

It is nevertheless a common occurrence for a defendant to confess to an attorney that they are factually guilty but later be found legally not guilty. This can arise through the exclusion of evidence, arguments at trial regarding intent or credibility. At the end of the day, if the prosecution cannot prove their case, the criminal justice system is designed to find that defendant not guilty.

It is crucial when accused of a crime to investigate every possible resolution of the case and find an attorney who is focused not on factual guilt but legal guilty. The attorneys at Yellow Silk Attorneys have decades of experience representing clients in an ethical and professional manner in order to push the criminal justice system to its purpose and preserve the rights of clients. The entire legal team is dedicated to this fight and will do anything possible to receive a dismissal, a positive plea disposition, a settlement, or a not guilty verdict. Call +234-806-507-2667 or send an online message today to discuss your rights during an open consultation with our legal team.